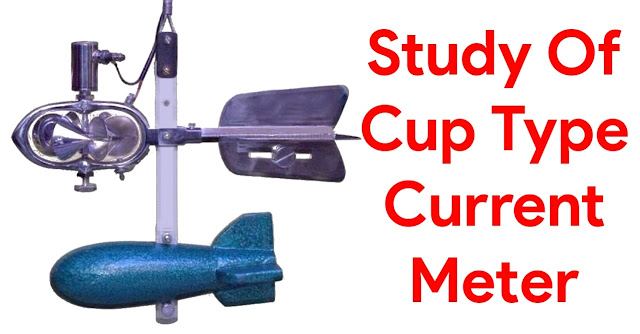 To study of the principle, construction and working of cup-type current-meter.

Current meters are a miniature reaction turbine when placed in a stream of moving water. It rotates with a speed proportional to the velocity of flow at that point. It can be calibrated by observing its rpm. When mobbing with a carriages mounted on rails across still waters at low velocities. Then it can be used to measure velocities of flow at different points in a stream. Once the velocities at several points in a cross section are known calculation of discharge is a simple mathematical or graphical problem.

As shown in figure, the cup type current meter (mfg. by watts) is shown in figure. The current meter consists of six conical cups mounted over a vertical spindle arranged or fixed in a horizontal plane.  At every revolution or after every five revolutions a signal is transmitted to the observer or to a revolution counter through electrical contacts. The entire meter is suspended by a cable in order to maintain the vertical stability of the cable in tension or to maintain the instrument perfectly aligned, a stream lined weight also called “dead weight” is provided at the bottom of it as shown in figure. Opposite to the cups, on the tail portion, fins are provided to maintain the meter truly in direction of flow inside the water. In order to place the meter in horizontal position i.e. to maintain the horizontal stability, a sliding weight is provided in the fins which can be adjusted accordingly with the help of screw and nut arrangement. A locking device prevents the cups from rotating when not in use.

The vertical spindle arrangement connected to the cups rotates inside a bearing located inside a steel frame. Above the bearing, there is a pivot made up of hardened steel. The locking device clamps the wheel and releases the meter weight.

• The cable is connected to the lifting link of the meter and lowered down at the point where velocity measurement is to be carried out.
• The working device is unlocked. The batteries are inserted in the recorder box so that electric circuit can be completed.
• The instrument is placed in such a direction along the flow that tail piece points in direction of flow, so that flow coming over it gets streamlined before coming upon the cups.
• According to the magnitude of the velocity of flow, cup rotates along the vertical axis in horizontal plane, contact is established in electrical circuit for every revolution.

• Meter is submerged under water and motion of water in the stream actuates it driving the rotary elements at a proportional to the velocity of flow.
• Bearing friction should be eliminated and the bearings in which the spindle carrying cups revolves should be watertight.
• Upper end or the bearing spindle extends above the bearing into an airtight chamber containing an arrangement of electrical contacts closed by a cam or eccentric device.
• A dry cell of 4 volts and a bell or a buzzer constitutes the rest of the circuit.
• By counting the number of beats in a known time noted by a stopwatch, the rpm can be calculated. Then the velocity can be determined from the calibration curve.
• When a number of current meters are working simultaneously individual counting is not possible and an automatic recorder is necessary.
• Arrangement generally, employed consists of a type chronograph and a chronometer.
• A paper strip is continually fed to a chronograph at a constant speed by means of clockwork and chronometer.
• After a certain number of revolutions a signal are received energizing a coil wound an electromagnet which deflects a pen marking a stroke on the paper strip.
• Time is printed on the paper and by counting the number of strokes in a known time interval.

Rating of current meter means establishing a definite relationship between observed number of revolutions made in unit time by rotating element and the velocity of the flow. This is done in a rating channel or tank usually between 30m to 100m in length and at least 2m wide and 2m deep containing water at rest. On two sides of channel rails are laid on which trolley runs at different speeds. Current meter at the corresponding values of speeds of trolley are noted. The statistical rating or a rating table is prepared. A typical rating curve is as per below formula

The curve approximately is to be a straight line, mathematically written as:
v = an + b;
Where, v = velocity in m/sec.
a  = slope of rating curve
n  = revolutions per second
b  = intercept on y axis
Two equations are sometimes obtained, one for low velocities and other for high velocities. Such rating curves or rating tables are supplied by the manufacturer. However, after the current meter is in use for about 100 working hours, the rating curves or table should be checked.

• More costly than Amsler pitot tube so, initial instrument cost is high.
• It is more in weight than Amsler pitot tube, so carrying it far larger distance along rivers can be more cumbersome.
• For very large number of revolutions, and very less number of revolutions, rating curve differs so velocity measurement has to be checked from rating curve.
• Excess impurities or mud gets clogged in the cups of current meter resulting in improper velocity calculations.
• More moving parts, bearing, etc require more maintenance than Amsler’s pitot tube.
• If there is leakage of electric current then improper reading will be observed.
• A number of gauge points are required along a stream for the average velocity.
• The stream flow should be as steady as possible for accurate measurement.
• Frequent calibration is necessary.

REMARKS:
The flow is assumed to be a steady flow with tolerable impurities. Effect of friction at the surface of meter is neglected. Loss of velocity due to body bends, etc. is neglected. Best working condition of current meter is obtained from “rating chart curves”.