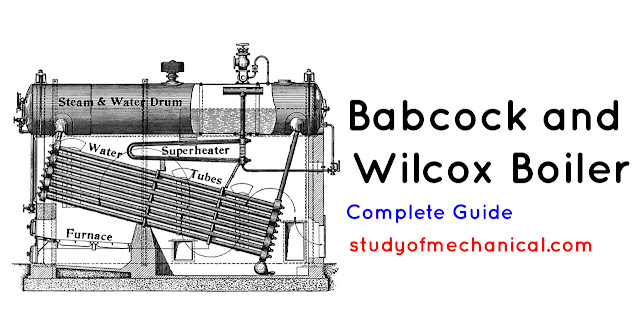 Babcock and Wilcox boiler: It is a water tube boiler. It is used to operate at high pressure. This boiler exclusively used when pressure is above 10 bar and the capacity requirement is in excess of 7000 kg of steam per hour.

Figure of Babcock and Wilcox boiler 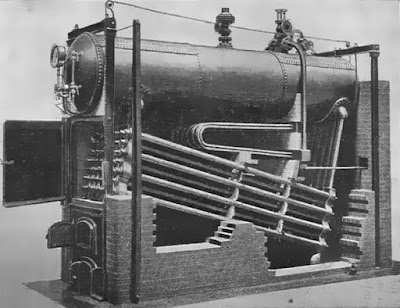 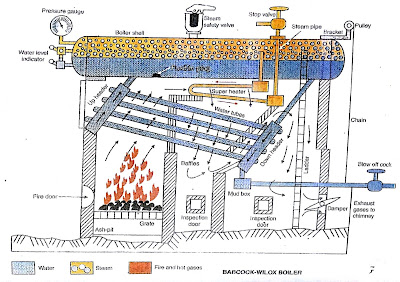 Specifications of Babcock and Wilcox Boiler

The particular relating to one such boiler is given as under:


Characteristics of Babcock and Wilcox boiler

Parts of Babcock and Wilcox Boiler

It consists of a larger cylindrical shell. The diameter of this shell and length is as per the specification. It is made of Steel plates 10 to 12.5 mm, bent into circular shape or drum then and welded or riveted together with the help of lap joints. this shell is longitudinal.

This Shell or drum is mounted at the top. the head of the drum is forged and is dished to a radius equal to the drum, connections are made with the uptake header and down take a header.

This boiler has a large number of parallel tubes of equal length. the internal diameter of the tube is about 250 mm with 25 mm thick. these tubes are placed at an inclination of 5 degrees to 15 degrees or even 3p degree with the horizontal Axis. This inclination is provided to bring about the natural circulation of water. these tubes are connected with Uptake and downtake header. There is a large number of rows of tubes each one of such rows of inclined tubes is connected to one set up two headers.

The baffle plates are provided along the length of the tubes. they are usually placed in the order to make the circulation of hot gases in the Sine waveform.

The boiler shell, tubes, headers etc. are suspended from the channel sections and are independent of the brickwork.

Below the uptake header furnace or trolley type Grate of the boiler is arranged.

The coal is fed to the great to this door. the coal feed to the chain grate stroker the chain speed is adjusted that by the time the coal reaches the other end off the grate, its combustion has been completed.

The Superheater is placed in the boiler. This will superheat the steam. it is "U" shape tubes. they are arranged horizontally between the drum and the water tubes. when steam is raised from the cold boiler the superheater should be flooded (filled with water) to avoid its burning.

This is operated with the help of pulley and chain passing over the pulley. they are controlling the passage of hot gases from the fire grate to the smokebox.

This is fitted with a long chimney for passing hot gases to the atmosphere.

It is attached to the bottom of the downtake header. Any foreign matter held in suspension in the water gets collected in this box due to gravity. it can be removed from here from time to time. A hand hole is provided to clean the Mudbox. blowdown cock provided for cleaning.

To clean the outside of the water tubes and to remove the soot, a door is provided. This will help to access to the interior of the boiler.

Mountings on the Babcock and Wilcox boiler

Accessories to attached on Babcock and Wilcox Boiler

1. Superheater: For increasing the temperature and total heat content of the steam.


Working of Babcock and Wilcox boiler

The water is fed into the boiler shell through the feed check valve. Due to gravity water passes through the vertical tubes, headers and fills up the inclined tube first. the water than collects in the boiler shell. the water level in the shell is adjusted with the help of the water level indicator. the coal is put on trolley grate. the coal is fired. the trolley is then pushed into the fire space.

in order to provide air for combustion of coal and circulation of hot gases. the damper is lowered to the furnace level. The baffle plates do not allow hot gases to pass to the right side. these gases heat the superheater and then move down. these gases travel in the Sine waveform and then move to the smokebox fitted with a longe chimney.

Water in the upper portion of the tubes is heated and rise up. the cold water from the down-take headers rises to take its place and water from the boiler drum flows down.

Thus the natural circulation of water takes place just by placing the water tubes at an angle of 5 degrees to 15 degrees with the horizontal.

Till the temperature of water in the tube and in the drum becomes uniform, the circulation of water continues. Finally, the water in the upper portion of the tubes is converted into steam. It is then collected in the boiler shell.

The sine-wave movement of hot gases enables contact with the maximum surface area of water tubes. The maximum amount of heat is transferred to water from the hot gases.

Steam collected above the surface of the water in the drum is a wet stream. the superheater is used to convert this wet steam into superheated steam. This superheated steam is then taken out through the steam stop valve fitted on the top of the boiler for different uses.

Advantages of Babcock and Wilcox boiler

Application And uses of Babcock And Wilcox Boiler

Using large power stations due to Greater operational safety and listen to space area as compared to fire tube boilers required to generate the same steam at the same pressure.